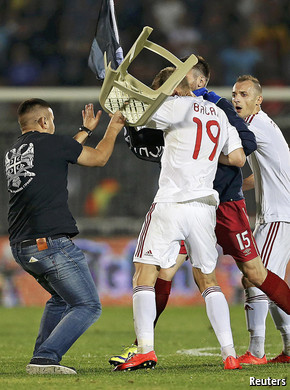 Not the best way to play the game

UNDER Aleksandar Vucic, Serbia’s prime minister, the country is caught between its European ambitions and his autocratic drift. This week’s visit by Russia’s president, Vladimir Putin, highlights Serbia’s dilemmas. Its main strategic goal is to join the European Union, yet it is refusing to apply EU sanctions on its traditional ally, Russia. Indeed, to celebrate Mr Putin’s arrival, a military parade to mark the 70th anniversary of the liberation of Belgrade was brought forward by four days, with Russian fighter jets flying over the capital.Mr Vucic’s treatment of the Serbian media also has a Russian hue. Discussing a sensitive topic, a senior editor slips her phone under a cushion, fearful that the secret services are listening. One of her journalists went to interview a man who refused to talk after being warned off by the secret police. A popular interview show has been taken off the air. Anyone asking critical questions of Mr Vucic risks a savaging by tabloids loyal to him.According to Serbia’s Independent Journalists’ Association, free speech and criticism “are dying in the Serbian media” and…