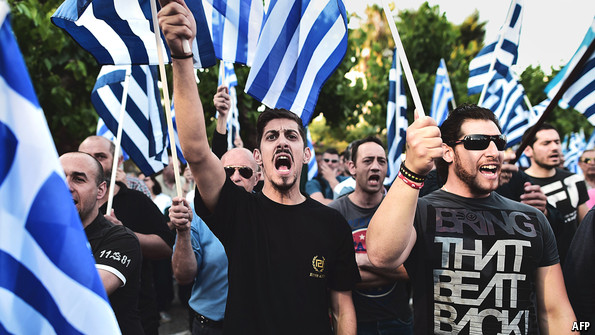 Golden Dawn on the march to Strasbourg

IT COULD have been far worse. As pollsters had predicted, the ruling centre-right New Democracy party of Antonis Samaras, the prime minister, was pushed into second place in the European elections by Syriza, a far-left party led by Alexis Tsipras. His fiery anti-German rhetoric and threats to rip up Greece’s bail-out agreement find favour with austerity-battered Greeks. Another “protest” party, the neo-Nazi Golden Dawn, captured almost 10% of the vote and came third, even though its leaders are being held in jail on charges of running a criminal organisation.Yet Greece looks no more unstable than it did before the elections. Syriza’s margin of victory was just under four percentage points, not enough for Karolos Papoulias, the president, to heed Mr Tsipras’s demands for a snap general election. Mr Samaras’s coalition partner, the PanHellenic Socialist Movement (Pasok), running under a new centre-left umbrella called Elia (Olive Tree), did better than the opinion polls had forecast. Together, New Democracy and Elia finished four points ahead of Syriza. New Democracy also won 11 of 13 regional…