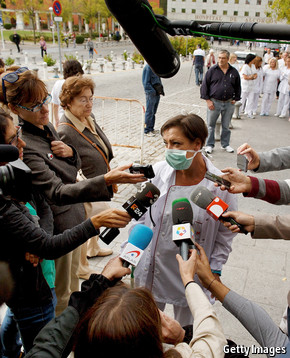 Taking precautions, after the event

FEAR spreads faster than disease. News on October 6th of a case of Ebola in Madrid, the first contracted outside west Africa, where the disease has killed 3,400 people since March, caused Spaniards to worry not only about its spread but also about the competence of their health authorities.The victim is a 44-year-old hospital worker, Teresa Romero, who had volunteered to help when two Spanish missionaries were flown home from west Africa and later died of the disease. Health workers in Africa are among Ebola’s most frequent victims. But in the developed world hospitals have elaborate protocols to minimise the danger of contagion. Ms Romero should have been wearing the right protective clothing, have known the safety protocols properly, and been quickly spotted as a danger to public health once she fell ill.Yet after Ms Romero caught the virus, she spent ten days on holiday in Madrid, sat a public exam and visited a health centre and hospital with her early symptoms to seek help. Ms Romero wore protective clothing at work and claimed that she had followed the protocols. She even rang the hospital…