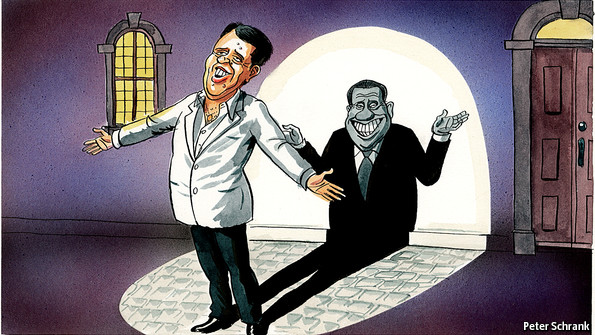 WHEN Matteo Renzi became Italy’s youngest prime minister in February, an old video turned up of him as a student in an amateur sketch playing the part of Silvio Berlusconi, the tycoon who has dominated Italian politics for 20 years. Deriding rivals as communists, promising to double salaries, offering to turn a cardinal into a pope, this Renzi-Berlusconi broke into song, promising “a government of brilliant people”.The parody has a strange ring of contemporary truth. To many Italians, Mr Renzi looks like a Berlusconi of the left. Although he does not suffer from a questionable love life, conflicts of interest and battles with judges, Mr Renzi is a showman and headline-grabber rather like Mr Berlusconi. As mayor of Florence, he appeared on a magazine cover in a leather jacket posing as The Fonz in the television series “Happy Days”. If Mr Berlusconi was a master of television, Mr Renzi is a devotee of the internet and social media. Like Mr Berlusconi in the 1990s, he is an outsider who has triumphed amid the collapse of a discredited political order.In Rome’s fusty palaces, with their tail-coated ushers, a gerontocracy has been swept aside by mayors from the…