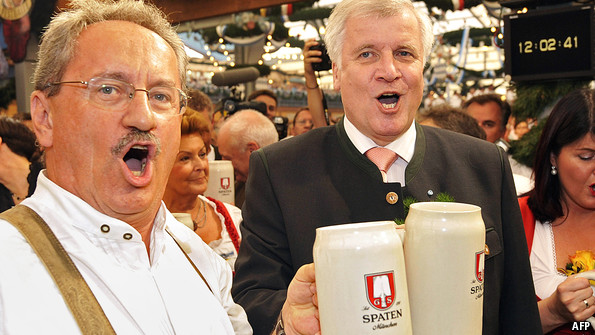 BURLY, jovial and sonorously rolling his Rs, Horst Seehofer, the boss of the Christian Social Union (CSU), embodies Bavarian populism and bravado. The CSU is a party that only exists in Bavaria, one of the richest, most successful and most distinctive of Germany’s 16 states. It has governed there for almost all of post-war history, often with an absolute majority, as now with “King Horst” as state premier. But its power extends deep into national politics, making it often more volatile and always colourful.Mr Seehofer is best observed working the crowd in a bustling beer tent, all ears for the popular mood, building up his “coalition with citizens”. With sly innuendo against the bureaucrats of Brussels or Berlin, against immigrants milking the welfare system or foreign drivers clogging motorways, he can excite an audience even without any clear ideology or policies.With a model railway taking up his basement, his hobbies and tastes are reassuringly ordinary. Even revelations about an illegitimate daughter have not hurt him, or his party’s advocacy of family values, in a state that lives by a relaxed Catholic brand of live-and-let-live. A Hund is…